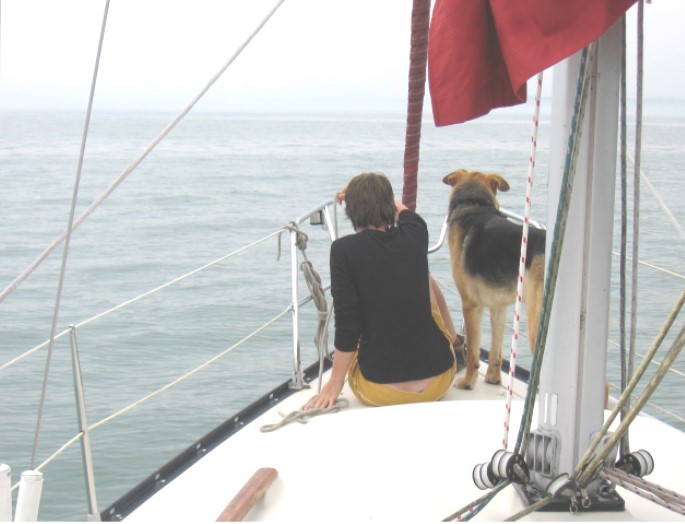 A funeral for a dog

Wilbur was more than a pet. More than a best friend. More than just a handsome, athletic, intelligent, affectionate husky mutt. He was a part of me. I had spent nearly every moment with him in the ten years leading up to his tragic death. He was hard-wired into my neural networks. He was a canine extension of my human self, as I imagine I was the human extension to his canine self.

A relationship with a pet can be very close and deep, and yet on a totally different plane than our human relationships. In the long history of strong human-animal friendships, it seems only in recent decades that so many people are elevating their four-legged companions as bonafide members of the family. With this shift, millions of people are also suffering a new kind of grief when their pet dies – one which can be unexpectedly profound, and for which there are few rites or rituals in place. When Wilbur died, I forayed into unknown territory, and chose things we normally reserve for our human deceased. I placed an obit in the paper, held a funeral, made a photo album, things that buoyed me in the dark days following his death – and helped create positive memories around the death of my fine dog friend.

Four years ago he was killed by wolves on the shores of Marsh Lake just within sight of our home. It was a February evening, the sun had set but there was still a dusky light reflecting off the snow. I let him outside just after dinner, and I remember seeing him curled up in the chair on the deck overlooking the lake. Suddenly, he burst into an explosion of barks and took off down the hill toward the frozen shore. I was thinking it was not that unusual, he probably sighted a neighbour’s dog or skulking fox. After we put the kids to bed, I sent my partner out to look. He came back a few moments later pale-faced and holding a tail. He said that the rest of Wilbur—a few legs, a spine—was now in a plastic bag in the shed. The wolves had made quick work of their dinner. I curled up on the dog mat with the tail, this incredulously long, soft, white-tipped tail and felt my insides tumble downward.

I’ve lost beloved humans before; I am no stranger to grief. But this thing, this kind of loss, is its own category. Like many of us in living with dear dog friends, Wilbur took a high position in the household — and in my heart. It’s easy to do with a dog like Wilbur who was smart, calm, sweet-natured, self-possessed and smelled like sun-warmed forest moss. He commanded respect and autonomy. He was a free dog who made good use of his privilege. A seasoned adventurer who told stories through his dripping, swollen panting tongue, his ravenous hunger, or sometimes, his unrecognizable vomit (I swear once, he upchucked what could only be another animal’s intestines).

These adventures made up only 5 percent of his life. The other 95, he was my faithful, adoring companion, accompanying me to work, to social gatherings, on vacations, or on my daily trail outings. Okay, so when he vanished so suddenly, it was like a plug was pulled and some kind of vital life force was drained from my being. The world, through my eyes, was literally a dimmer place. My blood was missing a vital ingredient. My daily routines ground to a halt. The dog bed became a regular place for me to curl up and weep.

In an attempt to move on with my life, I decided to hold a funeral service for Wilbur. Terry lit a 2-day fire, not just as a ceremonial gesture, but to thaw the frozen ground where we were to dig his grave.

I broadcast an invitation to anyone who ever cared for Wilbur. This included family, friends, and many acquaintances – it is incredible how many neighbours showed up who had befriended Wilbur independent of me. I put together a slide show, a little speech. Over 20 people showed up. They signed his guestbook. They cried with me around the grave as we lowered his remains then covered him with dried fireweed flowers before sealing him up with dirt. They shared whiskey with me and howled around the bonfire. Without a stitch of embarrassment or self-consciousness, I was the crazy, bereaved dog lady.

I knew what I was doing was unconventional. A funeral for a pet? I’m sure some people might scoff at the concept. But outside of the handful of people who showed up expressly to support me, and not necessarily because they cared for my dog, there were a good dozen or more who, to my surprise, attended the service primarily to honour their own special relationship with Wilbur.

A pet funeral is not for everyone, nor is it for every pet. But I’m sure many of you here in the Yukon have a non-human best-friend you might like to honour upon his or her passing. My grief was intense and the gathering and ceremony really helped to put some order back in my life. To feel supported by friends, to publicly grieve and share the loss with others was an extremely important thing for me to do.

I have two new dogs now. They are also incredible beings but aren’t quite occupying the same space in my heart that Wilbur did. Maybe this is because I have two kids and a spouse now, whereas Wilbur was my freewheeling companion.  Or like losing a soul mate, sometimes you just don’t ever fully “get over” the loss of a love.  Knowing that I will probably live the rest of my life missing Wilbur is okay with me now. Falling back on the memory of his funeral will forever serve me with strength – to feel that life net of friends surround me and carry out the rites that help give meaning to this kind of tragedy.