Hospice Yukon has been blessed with being served by many skilled and dedicated board members since its inception more than 27 years ago.

2017 was a year of change for our Board of Directors. We said a huge thank you and fond farewell to long-time volunteer and board member, Lori Eastmure, and a warm welcome to new board member, Patricia McGarr. Here you can learn a bit more about Lori and Patricia and their roles at Hospice. 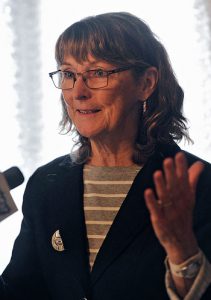 Lori was involved with Hospice since the early 1990s. In her early years of involvement she co-facilitated adult grief groups. For the past 11 years she served as a dedicated board member, and many of those were as co-chair of the board. She stepped down in May of this year. Several years ago Hospice awarded Lori with an honorary lifetime membership in recognition of her dedication and involvement. Her dedication and passion for Hospice services, and her warm, gentle nature will be missed at Hospice.

Here are a few words Lori had to share upon leaving Hospice this spring:

Losing my husband as a young wife was very difficult. I had no experience of loss this close. The advice back then was essentially about ‘getting on’ with life. I attended a grief group lead by Jackie McLaren and Sue Grabner which was life-changing. The following year Hospice Yukon was formed. I wasn’t ready to become a volunteer the first year but the second year I took the volunteer training and was on my way to healing in a very good way. One of these ways was in turning my attention to supporting others. It was transformative.

I started as a volunteer grief group ‘shadow’ leader. From there I co-led grief groups for many years. I really enjoyed meeting so many people in such a deep and meaningful way.

I joined the Board in 2006. Later, I became co-chair and held that position for many years. I think I had this long term commitment because of the remarkable people I met through this organization – the staff, the volunteers and our clients.  I have loved the challenges, the friendships and the accomplishments – especially the dream I and others have had for so many years – to secure a permanent home for our organization, which we accomplished in 2015.

I don’t know where I’d be today without Hospice. Thank you all for enriching my life. “

Thank you, Lori, for all you have shared with Hospice over the years.

And now, we welcome Patricia McGarr to our Board of Directors. Patricia has been a Registered Nurse for many years, and has been involved in various capacities with Hospice Yukon since its inception. Here’s she shares about herself and her involvement with Hospice over the years:

I came to the Yukon 32 years ago from Scotland and it has been my home ever since – well, apart from a couple of years in Victoria (where I worked with Hospice Victoria); a short stint in Edmonton (being a new Mum and supporting husband in his Master’s degree); and a couple of years in Ottawa (working with the Canadian Nurses Association). I have a husband of 31 years (length of time married that is – not his age) and have two wonderful children in their twenties. We are lucky to have our son here with us in the Yukon for now, while my daughter is exploring Canada and the U.S.in a camper van.

I am a registered nurse and specialized in Oncology in Scotland and England. I was the first coordinator of the Yukon Home Care program, which was when I got involved in the early days of Hospice Yukon. It was invigorating to be part of a very active planning committee when the association was formed, meeting weekly to plan volunteer programming in palliative and bereavement support. In the late ’80s and early ’90s I was involved in a variety of roles with Hospice Yukon including: member of the Personnel Committee; member of the Board of Directors; joint facilitator of adult bereavement group; and Program Co-ordinator from 1990-1993, taking over from Barb, our first Co-ordinator. (Thankfully, Barb came back on the scene).  It was always moving and meaningful to sing at the Lights of Life opening ceremonies with the Persephone Singers. Yikes! Prior to that, I think I even sang a solo at one of the earlier opening ceremonies in Horwoods Mall!

I took on the position of Executive Director of the Yukon Registered Nurses Association in 1996, where I worked for 17 years. During that time I had a lot of experience in working with local and national Boards of different styles and feel well prepared to contribute to the board of Hospice Yukon. It has long been my intention to be part of Hospice Yukon again in some capacity.

I look forward to this opportunity to serve again on the Hospice Yukon Board of Directors and help advance the philosophy, principles and values of our holistic and essential program. 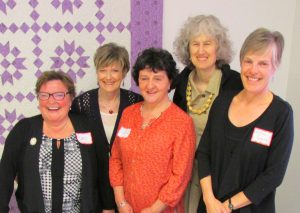 Thank you all for the important work you do!